What step Tesla needs to take next — and once again, it would be ground-breaking 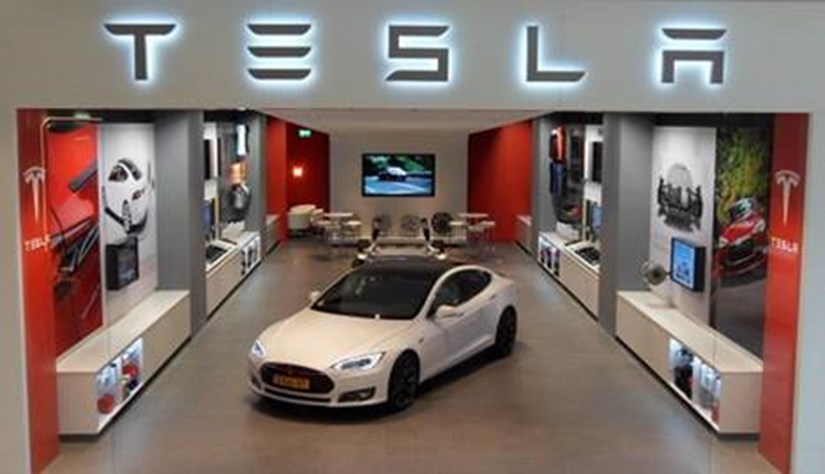 Eleven-plus billion in sales in the first three days…

To say it’s quite the accomplishment, well it doesn’t even approach the word “understatement.”  What it took Tesla Motors less than three days to accomplish, well it took months for Apple to get to that dollar figure with sales of the iPhone – and that is seen by many as the most transformative product of the current generation.

In a period of traditionally low gas prices, Tesla’s all-electric car has captured the imagination of the world to a degree even Elon Musk could not have dared predict.  Mr. Musk is riding an unprecedented high at the moment not only with his Tesla record achievement but also the successful unmanned landing of his Space X rocket on an automated robot-controlled barge in the middle of the ocean recently.

Now comes the hard part for Tesla Motors going forward – managing the experience of customers, and industry observers, who have put down $1,000 and a whole lot of faith in Tesla until that product is delivered as promised. And to then deliver on the Tesla brand experience during a time of super high expectations that is bound to be longer than anyone wants it to be. Some automotive industry analysts predict that cars ordered in March 2016 may not be delivered until 2020.

How does a company that lives in the world of possibilities go from building 500 cars per month to 13,000 or even 25,000 per month? They have already had severe issues with meeting delivery quotas in the first quarter of this year with the existing models.  If the Tesla Model S is an indication, demand is only going to grow for this $35,000 vehicle as it hits the road.

This kind of scaling-up is going to be a change like few complex machine-production companies have seen, least of all Tesla. Musk has been super aggressive in his need to change the world one electric car at a time.

Yet he has also been cautious and careful to do it better than anyone has ever done with a new car launch. The car’s ratings (see the infographic below for just a small slice of what kind of impression the Tesla brand has made over the past few years) speak to his meticulous approach to meet his level of perfection. 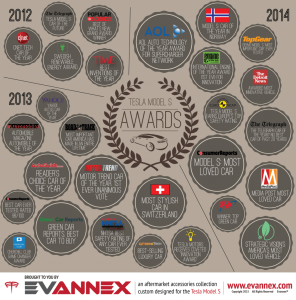 Before the assembly line begins to roll, Tesla needs to be rolling with an all-encompassing comprehensive customer experience strategy for the Model 3 customer that is as well-conceived as the car itself. And it is needed now, not a year from now.  “Ludicrous Mode” doesn’t only apply to a button on the dash of a car now — he needs to be “ludicrous” and create the first epic all-encompassing customer experience strategy in the automotive industry — and then make it a central pillar of the strategy of the continued growth of Tesla Motors going forward.

It is promising that the process of ordering the Model 3, Tesla stores and online, worked well during its pre-launch phase, but the sales process is only one link in a very long chain that needs to be considered in what could be a very long (and potentially lucrative) relationship between Tesla and its customers.

But in the Tesla customer’s eyes, the clock is ticking as they wait for the next 18-36 months to receive their much-anticipated, desperately desired Model 3’s.

Will this experience be painful, like waiting in line at the department of motor vehicles, without an answer, without the “wow” factor that defines Tesla’s brand? Or will Tesla use this time to build a relationship with and emotionally connect with these customers so that when the car is finally delivered, the customer’s relationship with Tesla is stronger even than the car itself? (Not to mention the need for a solid Customer Experience plan for maintaining a globally scalable and fruitful relationship in the post-delivery, and during the warranty period, with the global customer base.  Particularly when long-term reliability of the current models is questioned by testers and owners with a “worse than average overall problem rate.” — although those are disputed figures based apparently off early models that have since been corrected.)

Musk and his team must set the course on a viable and acceptable strategy for making the wait for a Model 3, and the receiving of a Model 3 as compelling as the engineering of this vehicle and its features and cool factor. Very few consumer brands have done this well. They are the brands that have become legends – both in the business world, as well with their customers – and the many fruitful rewards have quickly followed.

The examples of excellent customer experience in the automotive and/or the technology industries are few & far between — in that they don’t actually exist — and have never really existed in the automotive or tech industries.  There are several examples of companies that do customer experience very badly though — Volkswagen anyone?  (it has yet to be determined whether Tesla considers itself more an “automotive-first” or “tech-first” company as there is a complex blend of both to the ethos of the company as a whole.) 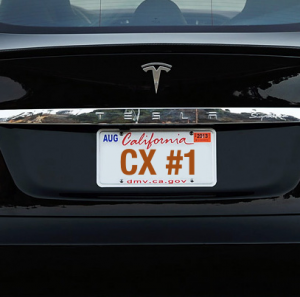 If you approach a large well-known large global consulting company about building out and improving the customer experience aspect of their business, you’ll get the same presentation that they have used for all their clients.  This usually takes the form of a standard “hundred slide deck approach” — all could be described as visually impressive, but “sub-par” (at best) on the strategic insights and execution – much less effective methods of how to develop a true long-lasting connection with your customers.

Tesla needs to define itself apart from the “competition” and look at using new & innovate ways to engage and involve the customer base.  That means looking at the best companies for Customer Experience (both big “global name brand” companies, as well who do business the “right way” for their customers whatever their scope and size); and then trying to adapt those tendencies and approaches to their own business – along with trialling and defining new CX methods that help push the boundaries of what is generally thought of as CX into new and interesting areas as well. 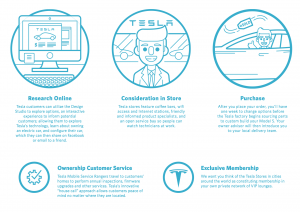 The “competitors” approach that most will take is a false flag in this case – Tesla, with its current stance and product line, has no true competitors for the time being.

The electric car market may still be in its infancy, but the traditional global automotive powers have yet to devote the time and budget to producing cars that capture the heart (and wallet) of the consumer.

An automotive giant like BMW or Mercedes may get there relatively quickly depending on their thirst to enter the space – but Tesla can seek the advantageous high ground by being to be “first to market” with a complete customer-focused strategy – and reap the rewards for that commitment.  Chevrolet will start production of the “Chevy Bolt” by the end of 2016 – but it is currently viewed as a substandard product to the Tesla (along with being saddled with the less-than-stellar overall reputation of a General Motors product by both industry standards and its customers) – and offered at the same price as the Model 3”, it could suffer in the current marketplace. (No word from Ford Motor Company on their plans at the moment — but it seems they have some ideas to look at the electric car market it seems.)

There is a forbearer to the excitement that Tesla is currently receiving – and it should be a cautionary one for Musk to ponder.

Saturn – “a new kind of car company” as it was dubbed upon its inception– was an automotive darling with a massive amount of hype and love in the motorized press when it was thrust into the spotlight in the early 1990s.  It also fell by the wayside fairly quickly after its meteoric rise (with its death knell by ceasing production of cars back in 2009.)  David Hanna wrote in Forbes in 2010 about the similarities between Tesla and Saturn:

Tesla doesn’t have the bureaucratic, internal politics and logistical nightmare than General Motors had to deal with in terms of developing, launching and maintaining the Saturn brand – but there are enough warning signs there that there should be some efforts made to understand the underlying issues and mitigate them as potential risk factors. 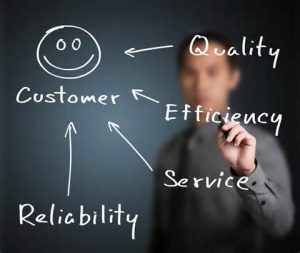 Tesla must look at what innovative companies like Netflix have done in dealing with their customers – allowing the people on the front lines to develop their own methods of resolution in conjunction with the company giving them autonomy to make the “right” decisions that benefit the customer in the short run, which benefits Netflix in the long run. (With the foresight to take into account their costly missteps as well – lessons from five years ago that a lot of current companies still make.)

In 1999, Netflix launched its monthly subscription service to movie-lovers who were fed up with late fees.  It was a shot across the broadside at existing companies at the time like Blockbuster – and pulled at the human desire of “convenience.”  They followed it up in 2008 by launching a streaming service – and as a by-product causing the aforementioned massive row with their customer base.  They extended their reach to their customer base by producing their own content starting in November, 2012 with their first original eight-episode show “Lilyhammer”, and the runaway success “House of Cards” soon after.

In 2015, Netflix rolled in over $6.1 billion in revenue – with a projected 30% potential growth for 2016 – mainly due to international subscriptions including breaking into the lucrative Chinese market (a market that Tesla will covet as an engine for growth going forward – pun intended.)

Recently, Netflix released its 2015, 4th quarter financials. They now have 75 million global streaming subscribers. The company continues to think big and has been expanding its streaming service in other global markets. Netflix has never forgotten where their success came from. They’ve even given CEOs, executives, and entrepreneurs across the global something worth thinking about.

That being said, Tesla clearly has some work to do (on multiple fronts) when it comes to CX beyond the initial pre-launch sales cycle – and the sooner they start devising excellent solutions to those set of problems, the better it seems.  If you’re going to think big (and Musk has never been one to think otherwise), don’t forget the most important asset of your business, your customers.