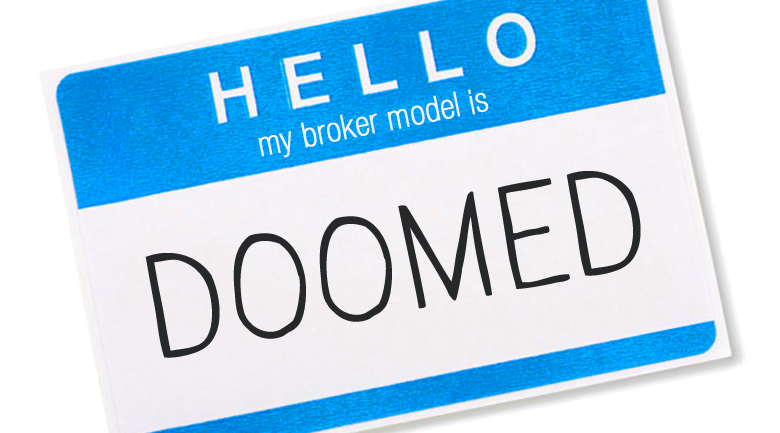 [Welcome back!  Kicking off this second installment of the series with numbers 3-5 on the list of why agencies are doomed (you can find the first part here — part three (the final installment) to be published tomorrow.]

Some might wonder how long a list looking at the problems could get.  Of course, this list is nowhere near definitive — just some musings I’ve put together from reflecting over the years — in consultation with a number of other agency veterans.

Just to clarify, I don’t work for agencies anymore  — gave up that particular ghost over five years ago.  In fact, I refuse to work with holding company agencies these days — for some of the reasons listed here as well — but mainly because it is not worth the aggravation. I’m not alone in that thought though.  So with that being said, let’s continue:

This is a common theme in agencies through a multitude of ways – seen and unseen by the clients.  The best way I can relate this is through a story that happened to myself and my digital team I was leading a few years ago.  We were told we were going to pitch a new piece of business – an “integrated agency-wide effort” for a “really sexy car account” – and that we needed all hands on deck for it.

It was going to be a landmark piece of business for the agency so we were told – particularly at that time, we didn’t have a “car account” (having just lost one – naturally) and this could be one marquee client for the entire agency.

What it really was: a pet project of the agency MD – he himself personally loved the brand – owned a couple of the cars I believe, so he pulled out all the stops to try and capture the account.

The fees for working on the account were actually going to be fairly miniscule given it was for a single country’s market (clearly not worth the effort); but, as his own personal pet project, we kicked off 8-10 weeks before the pitch with a fairly comprehensive multi-disciplinary team – and brought in some “heavy hitters” (creative consultants focused on the offline work (namely print and TV) – all working on a hefty day rate) to help cultivate a grand creative idea.

The problem was that the “grand creative” idea never came to pass in the slightest – and we knew weeks before the pitch that there was no way we were going to win.

Did we pull out of the pitch?  Hell no!  We made special custom business cards for all involved to give to the client at the presentation — featuring each team member sitting in or on one the hood of one of the cars;  we put on the regular glitzy dog & pony show for the actual pitch, we gave them the whole “rock star” treatment – the whole nine yards right out of the pitch manual.

After we completed the 60-minute pitch (which overall could best be described as a disaster – ran long, dead spots, couldn’t answer basic questions posed by the client), we exchanged the usual pleasantries with the client team over tea & biscuits.

One of the members of the five-person client team pulled me aside during this decompression time in our conference room – and admitted there was no way we were going to win the pitch, but they loved what my digital team came up with and would be taking it to the agency that would win the pitch.

All I could do was laugh…

I read a quote this week posted on LinkedIn from a global senior agency executive who lamented that agencies are getting the short end of the stick because they work too far downstream from where the actual business decisions are made.

But then agencies have a massively difficult time trying to show that they belong at a “big boy table” where those decisions are being made.

They don’t have the experienced staff who can understand and cope with the varied requirements and knowledge that the client needs to do to get ahead with their business.  (ed note: Perhaps it comes with an over-inflated sense of worth of the work you do?)

They can’t forge a true partnership because they generally refuse to be anything but a herded group conditioned to repeat the word “Yes” on an endless loop – rather than tell the client that maybe there is a better way to accomplish something – or even tell them “No”, and then illustrate why a particular idea may not be the best thing for the client to initiate.

Or, to develop a partnership to the next level, perhaps even offer a better alternative.  There are so many options for them to forge a potential better relationship – and they tend to bypass them because they think being liked by the client means the client will keep them around longer (and I’ve touched on this subject a bit more in this recent post.)

Another story to illustrate how this worked in a real-life situation:  I was brought in by a big global “communications agency” (read: a PR agency – and they wonder why clients have problems with them, when they themselves can’t even admit what they are trying to accomplish for the client.)

Anyway, I was brought in as an external consultant to help them win a new piece of business for a potential new global Fortune 500 client.

As before, same theme to the story – large team assembles over a number of weeks, several collaborative meetings (well lots of extra people in a conference room if nothing else); working on various aspects of the pitch (I was responsible for the digital aspect pretty much single-handedly as the agency’s “Head of Digital” was an ex-US marine who didn’t know much about how to construct a pitch — or digital as a whole – as I learned as the process developed.)

We even did a few practice runs over this time – including renting a conference room at a local hotel on the morning to go through the pitch one last time.  I believe it was another 60-minute pitch – of which digital was assigned “about 10-12 minutes” in the last 20-minute section of the hour.

We arrive at the client’s offices for the pitch – and began.  The client decided to make the pitch a bit more interactive than the agency was expecting it seems – or least that is what we were told going in.  For every question the client was asked, they were told by various members of the pitch team that I would be answering it….yes the “digital person” would answer what aspects of what the overall general PR and CSR strategy was for some reason.

This collaborative dialogue with the client continued for the next 45 minutes or so – for every question that the client would ask, seemingly 80 percent-plus of the responses was that I would answer it during my “digitally-focused segment.”

Needless to say I’m not sure I knew the proper response of what I was supposed to say to the client in this case; although I understand the basic principles in regard to public relations, we never worked on a practice Q&A session as part of the pitch so I didn’t know the particular agency procedures for accomplishing the tasks the client was asking.

Not sure if it was because they didn’t take into account the interactive aspect of the pitch, but we were massively behind schedule in terms of timing (which is generally a standard practice); and I was subsequently passed a note just before I was to start my section to say that my 12 minutes would now be “5 or 6 minutes tops.”

I quickly decided an icebreaking comment was in order before I started – I got up the head of the conference table in front of the projector screen and started with the line something akin to this:

“Hello! my name is Dan…I haven’t had a chance to introduce myself, but I’ve been long discussed since we’ve gotten here.”

The client was highly amused by the off-the-cuff comment, with a few of them outright chuckling after I made it….the person leading the pitch however was not entertained it seems.

I still keep in contact with the person who ran the pitch process for the client – who loved both the comment, and the stuff I came up with around the digital piece…. I however don’t “communicate” with the agency any more.

Agencies have an “inbreeding” problem – when they look to staff people on projects, they generally decide that the person has to have the exact background and history for the client – i.e. to work on a car account, you have to be a “car guy” having spent years only working on that specific vertical (although, to be fair, they may not be as strict as the big strategic consulting houses on this rule.)

They are far too specific in their requirements for staffing of personnel on projects, and it hurts them.

“Generalisation” as it is seemingly dubbed (i.e. – varied experiences that could be used to bring a new perspective to some of the client’s issues) in someone’s work history is seemingly classified as a determent in the agency world, rather than a potential to bring new life and a new point of view to the project and client.

The most amusing aspect of this is when an agency wins an account, they often hire a number of the exact people who worked on the account at the previous agency that has just lost it.  I’d love to give an example that I’d observed of this happening – but it is far too common, and I’m afraid I’d leave someone out.

(So this is the end of part two (you can find Part One here — part three (the final installment) to be published tomorrow.  Feel free to leave feedback as I enjoy reading comments — even critical ones!)